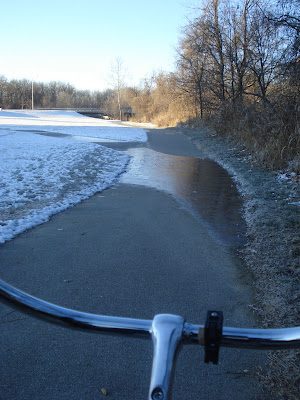 There were a couple short hours Wednesday when the sun was shining and the temperature approaced the freezing mark. Those two combined caused the snow that wasn't in the shade to melt. After the sun went down, the run-off froze again.

Here is the deal; I don't mind riding on snow-covered ice. I don't really mind riding on ice created by freezing rain. Riding on this re-freeze stuff is trecherous. If you can't ride around it (like I did yesterday morning) I suggest slowing down a bit and sticking your feet out like pontoons.

Today was even worse. Beginning around 11am yesterday, temperatures were above freezing and stayed that way until 4am today. Starting around 11pm last night, the area was covered in fog and mist also until around 4am. The result was black ice. 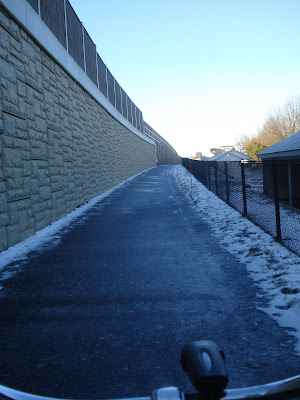 When going down hills I kept one foot on the pedal for the XYZ's coaster brake and the other dragging the ground. Made it with no problems. There were several motorists who wish they could have said the same. Once I made it to the office I decided to just lock the bike up to the rack they installed for me to let it drip outside. I won't park my expensive bikes here ... they come into the office with me. 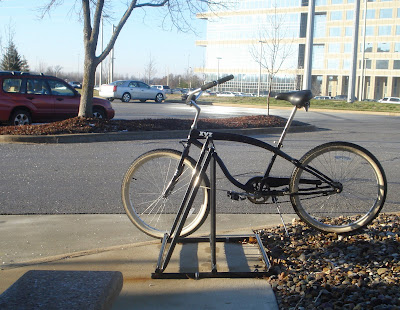 And, lastly, from The System:

Warren,
I wrote about my morning ride on my facebook page. Wow, ice is tricky. I was glad I was on my bike, rather than in a car. The roads were the worst.
I rode "pontoon style" too, and got to work just fine. I can't say that for the two cars that were trying to occupy the same space at the same time... unsuccessfully.

Awesome, thanks for the link!