How to double your miles while riding errands 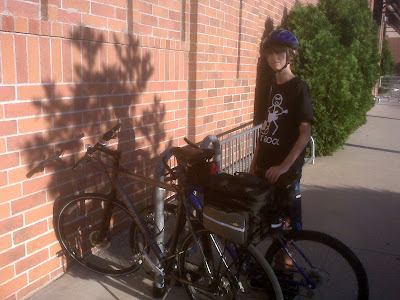 Forget your wallet. (Curtis was not amused.)
Posted by Warren T at 8:25 PM 1 comment:

A huge tip of the helmet to Noah for putting together a great midnight ride after Lenexa decided to change their annual Midnight ride. Noah sought out and found another cave that we could ride through and set up a great route to the site. Peter and I rode the Lenexa ride the last two years and were SO glad that Noah set this up. Anyway, here are some rather blurry shots from early this morning. 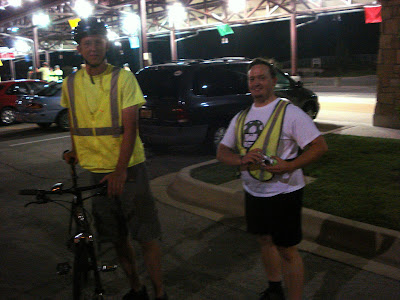 Peter and Noah before the ride. 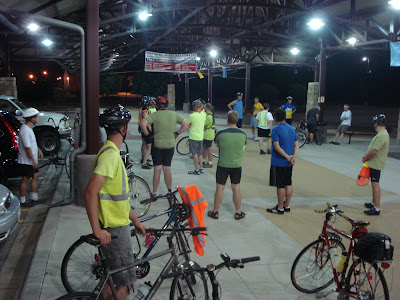 The group mingles at the Merriam Marketplace before the ride. 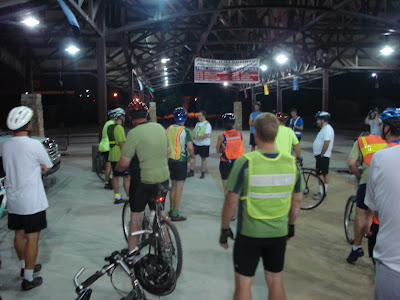 Noah explains the rules of the ride. 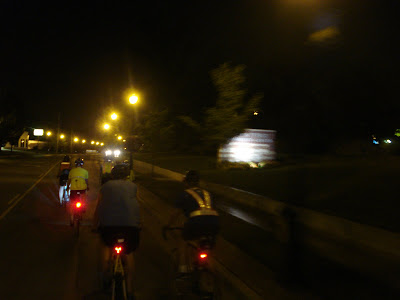 We pass the Irene B. French Community Center. 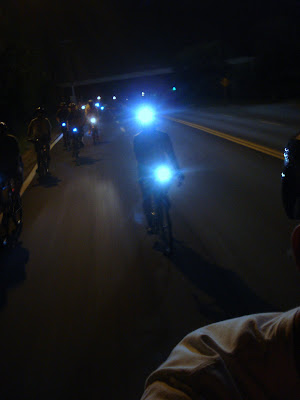 I was followed by some sort of alien. Made it easier to look out for man hole covers... 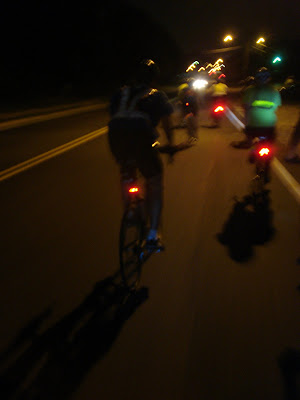 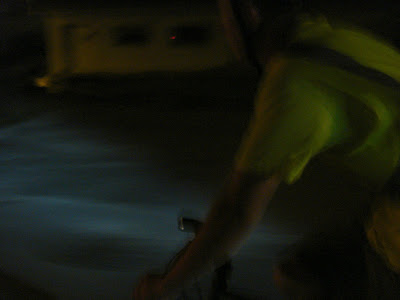 Peter to my right with the glow of several other rider's headlights off to the side. 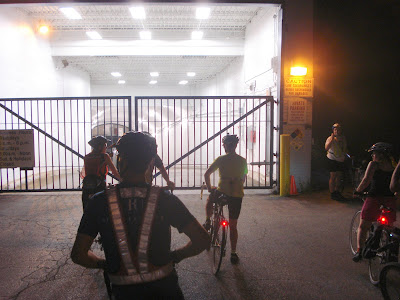 We wait for Noah to take a picture and open the gates. He warned the group that it would be slick and to take your time and be mindful... 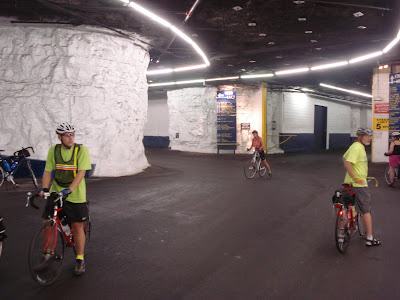 We wait at the bottom of the hill just inside the caves for the people who didn't take Noah's message to heart. Mark Rainey in the yellow shirt on the right. 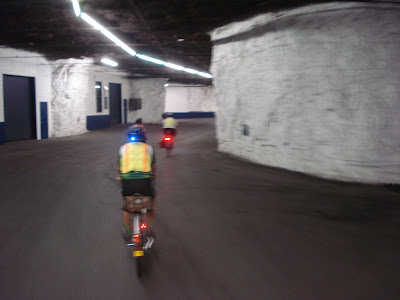 Riding in the caves. I was more concerned with staying upright than with having clear photos. 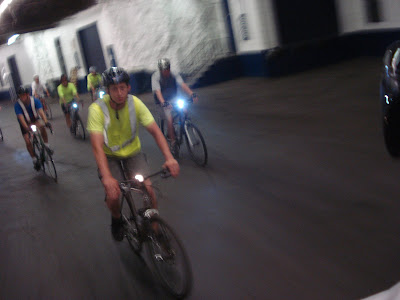 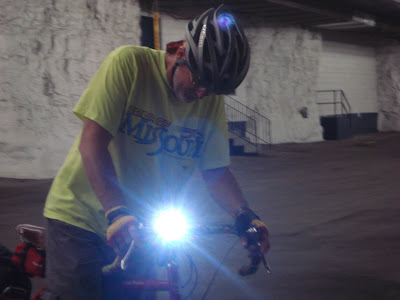 Mark on his well accessorized Trucker. 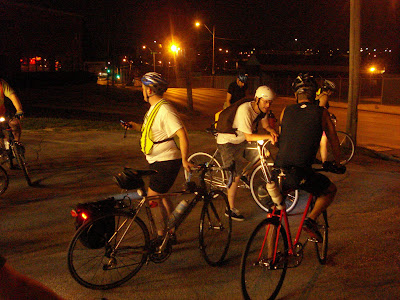 Having made it out of the caves, we stop to make sure everyone made it. 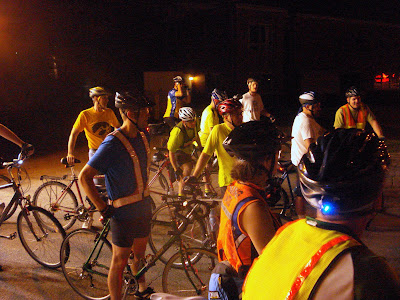 Getting ready to head back. 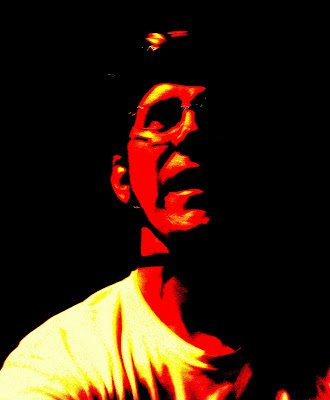 My one attempt at a panda portrait turned out so bad I decided to make it worse.
Posted by Warren T at 2:21 PM 3 comments:

What color is the "old guy" jersey?

Curtis and I rode our bikes to scouts last night and talked Tour de France all the way. As we were riding along, I thought I heard my name being called and, sure enough, Mark R (who has been accepted as a Course Marshal for the 2009 Tour of Missouri) was working on a bike in his garage. We got the chance to chat a bit before I had to take off. Good to see you Mark.

As we wrapped up the meeting I took the opportunity to step in to do the Scout Master's Minute. I explained to the scouts how the TdF that day had a huge peloton that was suddenly split into two groups by a cross wind. The group out front took the opportunity to take and keep a solid lead. This set up the possibility for Lance Armstrong to earn the yellow jersey if his team won the Team Time Trail the next day*. I said that there are a lot of times that people just go along with the group and that something may come along to shake things up; when it does be prepared to step up and be a leader. I thought it fit.

Curtis then decided we were in a race home. We talked about the different jerseys that are awarded and with one block to go he decided he was a sprinter. I've NEVER had to work to keep up with guy before. He won.

*Note: it almost happened today! Lance now trails Cancellara by about a tenth of a second. Ben Stiller did NOT look happy to be on the podium presenting Cancellara with the yellow jersey.
Posted by Warren T at 4:03 PM 1 comment:

...for the Tour de France. I'm hoping I can get at least one of my kids to buy into watching it with me. Curtis did two years ago and I enjoyed our bike rides during that time when he'd claim to be his favorite rider.

I jumped the gun and rode a couple miles to the grocery store yesterday and paid for it with some serious foot pain the rest of the day. 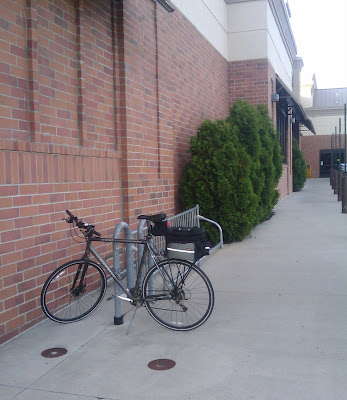 I guess I'll have to rest up a couple more days before I try again. Bummer. I've got to get into shape for Noah's Midnight Ride. (I still wish he'd call it the Anti- or Un-Lenexa Midnight Bike Ride...