December 2011Christmas gift from my wife ... a trailer hitch and platform bike rack. 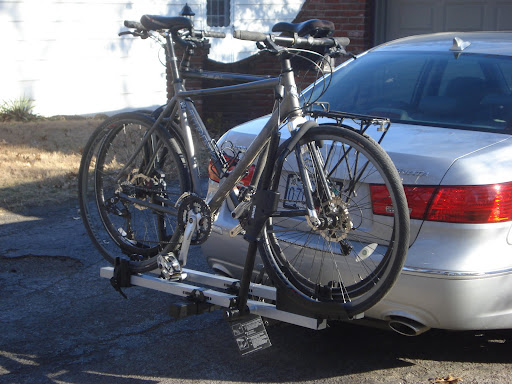 For over a week I failed to notice that my wife had borrowed my car and had a trailer hitch put on it. We'll be testing this rack out in just a bit as my son Peter and I head to Shawnee Mission Park to ride some of the Gary Haller Trail.
Posted by Warren T at 9:17 AM No comments:

Is there anything worse?

December has been a lousy month for bike riding for me. Up until this morning I had only ridden three times because I was in Dallas for a week, when I got home it rained too much and then last week I had a cold. I was bound and determined to get out this morning.


There are many things I like about riding in cold temperatures, the thing I like most is I don't have to deal with as many people out on the Indian Creek and Tomahawk Creek Trails.
There are some things that you do have to watch out for, including ice. Remember, we've had a lot of rain lately. There are several patches of ice due to run off from the saturated ground, including a big patch in the middle of a long, steep, winding decent. Just keep your eyes open.
After riding 6 miles I encountered my first jogger. I rang my bell several times as I approached him from the rear. He was wearing earphones and jogging with a dog on a retractable leash. I hate retractable leashes! So, even though I rang my bell and shouted "GOOD MORNING" he didn't hear me and was startled as I rode past. Ugh. I thought to myself "There's nothing worse than a guy jogging wearing earphones and using a retractable leash for his dog." But, of course, there are worse things...
Less than two minutes went by when I approached two guys jogging with two big black labs OFF LEASH. I rang my bell and the guys moved out of the way but the dogs zigzagged around in the path. I had to stop short to avoid hitting them. I harnessed the power of an angry glare and moved on thinking, "there's nothing worse than a couple guys jogging with dogs off leash." But, of course, there are worse things...
Three miles from home I make the sharp turn to go under Nall and there, in the middle of the path next to the creek, sat an idling CAT bulldozer taking up the whole path. Fortunately, I always slow way down taking that blind curve thinking there might be another biker or jogger under there. Is there anything worse than a bulldozer taking up the whole path in a blind curve?
Yes, there are many worse things that could have happened today. But they didn't. All told, there were maybe 30 seconds to a minute of bad experiences this morning during an otherwise wonderful one hour bike ride on a clear, crisp morning. In retrospect, it was a really nice start to the day.
While I've got the opportunity, I hope you have a Merry Christmas and Happy New Year.
Posted by Warren T at 8:01 AM No comments: