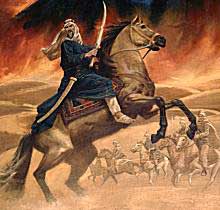 One of the things I had always admired in my father was that I never heard him utter a cuss word. Not once. Not even mild, broadcast TV replacement ones. I hope my kids will be able to say pretty much the same about me ... but I know they've heard me use a couple of the mild replacement ones a couple of times, especially when I'm driving. I've been guilty of calling some other drivers the modern day equivalents of Racca. But I'm going to change that. I'm going to try to emulate my dad.
I do recall my father remarking that someone was "driving like a Jehu," so I'm going to go with that. I'm also going to stick with his pronunciation jay-hoo, rather than the dictionary's jee-hyoo.
So, the text for this morning's message comes from the book of Second Kings, chapter 9, verse 20:

"The lookout reported, 'He has reached them, but he isn’t coming back either. The driving is like that of Jehu son of Nimshi—he drives like a maniac.'" (NIV)

So Jehu had been anointed king of Israel and was headed to Ramoth Gilead with his troops to dispatch Ahab's son Joram. The troops had been spotted and first one and then a second rider had been sent out to find out if the troops were coming in peace. The riders were told to fall in behind.


It reminds me of a bike ride I took with my son Peter a couple weekends ago. We decided to head south on part of the route I'd ridden for the Tour de BBQ. A good part of the route was on Nall between 123rd and 157th. As we headed south, things were mostly good; we had a nice tailwind and most of the drivers gave us plenty of room. Things changed as we headed back north. That nice tail wind turned into a nasty headwind with gusts pretty steady around 25 MPH. Drivers turned ugly and aggressive as well. Just past 135th a large pickup truck pulled up next to me, their front fender two feet to my left, and paced me for about 20 seconds before gunning it to pull ahead and pass myself and then Peter. There were no cars in the lane to his left. I suppose the driver was just trying to teach me a lesson or something. This was not an isolated incident.
When we got an opportunity to get back on the bike path, we took it. It just felt too dangerous. I didn't want to be out in front of a bunch of Jehus anymore.
Something to keep in mind, next time you're out in front of, or mixed in with, a bunch of Jehus; pull over and fall in behind. Let them drive off like a maniac and wait for the danger to pass.
Stay safe out there, and stay off Nall on Sunday afternoons.
Posted by Warren T at 9:28 AM 1 comment:

I reached a milestone today. Since I began noting my mileage back in July 2006, I have ridden 10,000 miles. This may not seem like much to some; it may seem like something heroic to others. Regardless, I'm glad to see that number on my spreadsheet. And, really, that's all it is today -- a number on a spreadsheet.

Chain and cassette problems cropped up late last year, so I started riding the 2007 Mendota. My number of miles ridden per month dropped from triple digits to double digits. I'm not sure what caused the drop. Riding a different bike? The lack of a bike computer? Unusually nasty winter weather? More time spent walking the dog? A combination of all those, perhaps.


Throughout the spring, the malaise continued. In June of this year, I took a ride to the grocery store on Bucephalus which required no shifting and decided then and there that I had to get a new cassette so I could start riding this bike again. The next day the bike was fixed and the number of miles ridden skyrocketed (if you could call it that). I broke my previous monthly mileage records in July, August, September and have already beaten the old record for October and it is just past the middle of the month. I am on a roll. Last week my buddy John even mentioned that I've seemed a lot happier the last couple of months...

I took the opportunity to ride the 62 mile route in the third annual Tour de BBQ on Saturday October 1st for a number of reasons. It’s a great fund raiser for the fight against cancer. It was an opportunity to go on the longest ride of my life -- that’s right, I’ve never ridden over 60 miles in a day before and hope that doesn't lessen your opinion of me. It was an opportunity to participate in another group ride as I’ve ridden in less than a handful.

I had a marvelous time.


The weather was beautiful; sunny and chilly with no wind in the morning and pleasant in the afternoon. The ride was very well planned. The route was great (for the most part). The SAG stops were great (volunteers, food, port-a-potties, well spaced out).

There were supposed to be over 2,000 riders and I’d believe it. One of the organizers has told me that they've not had their post-event meeting yet so the numbers could go up. I also can’t comment on how much was raised because they’re still raising money and won’t have final numbers until about a month from now.


The only thing that surprised me was lack of interest in the event by our local media. I know for a fact that the television news directors were told in advance. One TV station showed a little footage from a traffic helicopter before the ride took place, but other than that the only videos I’ve been able to come up with is from the radio station that was a sponsor … 99.7 the Point.

99.7 the Point’s video
Kelly and Erica discuss the board and then Erica gets engaged. The proposal (I’m in it at 2:58 - 3:06)
This year’s grand marshalls
I would have thought something that impacted 62 miles of area roadways would garner some interest from the news directors in town. Guess not. In my experience with local media, the only way to guarantee that they’ll cover the event is if they’re sponsoring it in some way. It makes it look like they care, I suppose. This should IN NO WAY diminish all the hard work Kelly Urich and the folk at 99.7 the Point put in.

Kelly was one of the people who got this whole thing rolling in the first place. He genuinely cares about the fight against cancer. Many, many thanks to Kelly and the whole board.

The ride started at 07:00 (for those of us riding the 62 mile route) in the Kansas City Power & Light District in front of the Sprint Center and headed south down Grand and then Main. 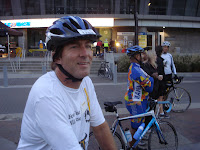 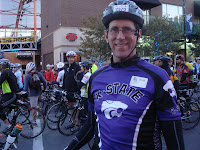 We were released in groups of 100 or so. My biking buddy Chris and I were in group 2.

Within a few blocks of the start, stop lights began the process of splitting the groups up even more. Almost everyone riding stopped at red lights … the stop signs in the residential areas, not so much.

In less than 10 miles I was back in the neighborhood that my wife and I spent the first 17 years of our married life in. The first SAG featured the BBQ of Smokestack, a block away from our first house. In my opinion, Smokestack has the best beans in town.


From there, back to the Kansas side through Leawood and Overland Park to Spin Pizza for some gelato and fruit.


Back on the road we headed south again and then back over into Missouri to Jack Stack in Martin City.


I believe some riders main goal was to make it to this watering hole. I wonder if they continued on or just called it a day...


Back on the road, headed north. I don’t think the moving van on Lee Boulevard was part of the plan...


Once we crossed 95th street, those of us riding the 62 mile route joined up with those riding the 35 miler. I believe the 15 mile ride also made it to Oklahoma Joe’s. Busy, but very, very good BBQ and worth the wait (which didn’t take that long).


I comforted myself with the thought of all the calories I was burning during the ride...

We made three more stops: RJ’s, Johnny’s and Woodyard before heading down Southwest Blvd. and then up Walnut.


The route was great … even with the short stretch of rough, hilly roads in Shawnee Heights where several folk failed to heed the “Slow Down” & “Rough Pavement” signs and ended up with flat tires (or worse). Perhaps one more sign would have helped ... SERIOUSLY, SLOW DOWN, ROUGH PAVEMENT!!!

I’m looking forward to riding in this event, or volunteering to help next year.


If you rode, you'll find 2,604 pictures of the event (some including me) at Atherton Photography's site.
Posted by Warren T at 3:25 PM No comments: