Some Thoughts on Barnes & Noble

Barnes & Noble Inc. is abandoning the strategy that made it a bookselling behemoth two decades ago -- uniformity designed to create economies of scale and simplify the shopping experience. Instead, the company is empowering store managers to curate their shelves based on local tastes.

Good! Now instead of going to the store, not finding the book I'm looking for, ordering it from the person at the customer service desk...and then never hearing back; perhaps they'll be better able to help me in person.

In Mr. Daunt's view, the very survival of bookstores is on the line. "I don't think we have any God-given right to exist," he recently told a group of publishing-industry professionals. "How is it that bookstores do justify themselves in the age of Amazon? They do so by being places in which you discover books with an enjoyment, with a pleasure, with a serendipity that is simply impossible to replicate online."

Don't get me wrong, I really like my Nook, but the last couple of years I've tended towards more paper over digital. Not that anyone cares, but in 2011 and 2012 I read three times as many books on my Nook as I did paper books. 2013 through 2016 it was pretty much 50/50. Since 2017 I've gone back to reading two or three times as many paper books rather than digital. And yes, there is something special about spending some time browsing in a brick and mortar bookstore.

What's the opposite of 'wonderful' I wonder

What walks down stairs, alone or in pairs and makes a slinkity sound?
A spring, a spring, a marvelous thing!
Everyone knows it's Slinky.

For those of you, like me, whose formative years were the early 1960's, you probably had, at some point, a Slinky. I'm sure the only reason I wanted one was due to the television commercial with the cleaver jingle noted above. I hope your experience was better than mine, although I doubt it could have been.

The commercial I recall showed at least a couple Slinkys in a lively march down a long staircase. I grew up in a modest single-level ranch house where the only thing approaching stairs was the single step between the kitchen door and the garage floor. Later, when my parents had added on a Family Room in the back of the house, there was a similar single step down to the patio. So the jingle's premise fell apart quickly. What walks down stair?

So the number of things this "wonderful toy" could do were limited. You could place each end in your outstretched hands and raise and lower them in a see-saw motion. That was good entertainment for ten to fifteen seconds and actually did result in a "slinkity sound." Or, you could stretch it out to see just how long you could make the thing. This required the assistance of a friend, I should say a TRUSTED friend. And then one of three things was going to happen: this marvelous spring would be stretched so far that it would never go back to it's original coil, your trusted friend wasn't really trustworthy and you got a face full of metal springy recoil, or, more likely, the spring would twist a bit in the middle creating a stress point and then break resulting in a piece of what I'm convinced they use for razor wire screaming back into the bodies or face of you and your now former friend at the speed of light.

Why did I ever want one of those things? More importantly, why did I think it would be a good idea to get one for my kids ... even if they were plastic now. Broken jagged spring is just as deadly if it's plastic as it is when it's rolled steel.

Fun for a girl or a boy, or lucrative for emergency room staff? I don't know. Now, where did I put my old chemistry set?

While out walking the dog I smiled, raised my hand in greeting, and issued what I thought was a cheerful "good morning" to a passing neighbor. No cheerful hello was returned. Perhaps that was because earlier I had dutifully picked up dog poo in a plastic bag which was held in the hand I was waving. I may never know.

So, I woke up this morning and, for some reason, asked myself: What is something that is true and then immediately untrue? I came up with this:

I have never, that I can remember, used the phrase "totally radical" in a sentence.

Not that kind of bug

Out on my bike this morning.

To the person who drove up next to me at the stop light and thought I shouldn't be out in public because I coughed: Yes, it was due to a bug, but not due to Covid 19. I'd just swallowed a flying insect. Different kind of bug.
Posted by Warren T at 6:50 AM No comments: 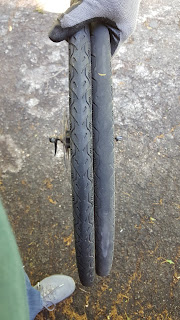 Once again it was time to swap out tires on my back wheel. Fortunately I still had one of these Michelin City (City Reflex, I think) tires in the attic. I really like these tires, but I don't think they make them any longer. Too bad. They've always served me well.

My current set should last me a while since I don't ride nearly as much as I used to a few years back.
Posted by Warren T at 6:40 AM No comments:

On the other hand...

See the previous post where I said 'no thanks' to taking my grandson on a ride on the Indian Creek Trail on a weekend. He's not ridden that much, so we rode a mile on the trail adjacent to Metcalf since there aren't normally many people riding that stretch. Then we ducked down to ride next to the creek for another 3/10ths of a mile so we could look for ducks and other wildlife (and maybe see if we could skip some rocks on the water).

That last 3/10ths of a mile was a challenge as we were met by or passed by several other cyclists. But he had fun, and that is what actually matters. 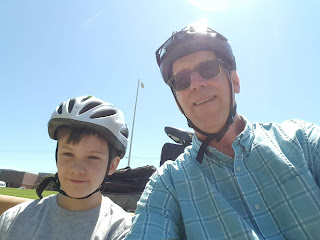 So, while 2.6 miles doesn't sound like a lot … we were out of the house for close to an hour and, hopefully, he'll have some fond memories down the road. We're already planning our next outing.
Posted by Warren T at 9:25 AM No comments:

My wife and I are going to watch two of our grandsons for a couple hours tomorrow and I thought it would be fun to go on a bike ride with Beau, the seven-year-old. It was so nice out this morning I decided to take a reconnaissance ride on the multi-use path that used to feature so prominently in this blog.

I'd say I couldn't remember the last time I took a ride on the Indian Creek/Tomahawk Creek Trail, but I've been keeping a spreadsheet of my rides since 2006, so that wouldn't be true. I used to ride that trail pretty much daily. I am a bit shocked to note that the last time I rode it was in September ... of 2018.

So... we won't be riding on the trail tomorrow. We'll ride the residential streets in our subdivision.
I have NEVER seen as many people on the trail as I saw today; not even during the Pokemon-Go craze. There seemed to be an equal split of pedestrians and cyclists and most of the people on bikes seemed to be families with kids Beau's age. So, again, no thank you.

I did take a moment to stop at my favorite bench which has been one of my favorite places to go to get a little quiet. No longer. I guess I'll have to go to an airport terminal or something to get some peace away from the house. But someone did leave this little stone with a nice message. 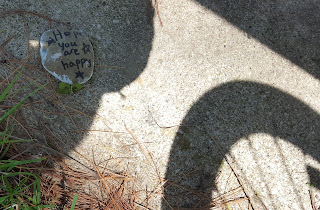