With temperatures in the 40's this afternoon, I had 30 minutes during my lunch hour to sneak in a ride. Mapped out a 5 mile ride, mostly on 99th/99th Terr. A little traffic sure helps bump up the average MPH.

Glad I got it in. Looks like more snow and ice are just about here. Back to the gym tomorrow.

Yesterday it wasn't quite as warm, but I had a few more minutes to use so I headed to the library to pick up some more of those videos I complained about recently... My bike was a bit lonely in the rack. The camera phone made everything a little blue (perhaps because of all the snow?). 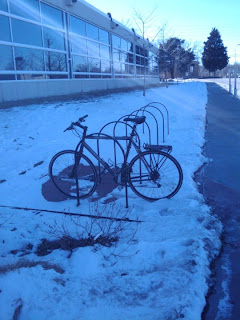 What a weird encounter! With three hours sleep last night and the threat of freezing drizzle and snow on the way, I decided that I needed to get out this morning and jump start my day. It was a nice ride on mostly side streets -- until I was just shy of one mile from home.

I was riding on a two lane, minor arterial street. A car was approaching from the other direction and slowly crossed the yellow line into my lane. It was a neighbor of mine from a few houses down and they had a really angry, determined look on their face and were muttering something to themselves as they traveled head on my direction. I pulled down my balaclava, exposing my face, smiled and waved. The look on my neighbor's face was, as they say, priceless.

Now, there are many ways I could handle this. I've decided, for the most part, to just act as though it never happened ... with this one exception:

With five kids, I've never really encouraged them to go door to door for the various fund-raisers that they participate in for school, sports, church, scouts, etc.. I just didn't want to be a pest. Now, however, this neighbor of mine will be visited for each and every fund raiser my kids have. Within the next month they'll be encouraged to buy trash bags, cookie dough, entertainment books and flowers. Why not have fun with it?
Posted by Warren T at 6:46 AM 5 comments: