450 students attend my youngest son's elementary school. Of those 450, 180 ride the bus, leaving 270 to get to school via parents driving them, walking or riding a bike. Yesterday I took my camera along to get a picture to use as a foundation for a presentation I'm trying to put together to encourage more kids to get out of their parents cars and becoming self-propelled. Yesterday was an anomaly; there were two bikes in the rack. Normally there is only one, my son's. 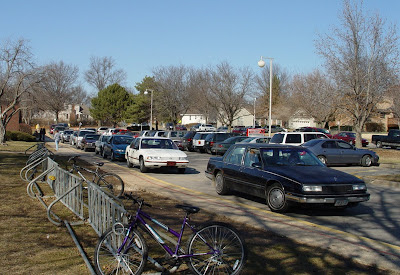 This was the calm before the storm. Once the kids come out, more cars show up and everyone is jockeying for position and struggling to get out.

So, here comes the science: Percentage of kids that rode their bike yesterday = 0.7. I do not have any numbers on how many kids walk, but I plan on chatting with the two crossing guards stationed at the two busiest intersections on the main street (one of them is a half mile away from school).

My point is, the weather was nice enough that many of the kids who are driven to school could walk. Parents who drive to drop off and pick up their children because they are afraid to let their kids walk should try walking too. I noticed one parent drove 0.2 miles to pick up their child. That is 352 yards. I don't get it, why didn't they walk? It was 48°, a beautiful day. My school isn't an isolated case; check out Friz's post on CommuteByBike for an example that trumps my 352 yards.
Posted by Warren T at 8:26 AM

My sister's a Fifth-Grade (or is it Sixth this year? She alternates) teacher in Olathe. I should ask her how many kids bike to school.

My guess is that it's more than two. If it's warm enough, the skate park across the street from the school seems to always be busy with kids hanging out on bikes, skateboards and roller blades. I know there are a lot more kids in the area than I see, so I'm assuming there's a good number who'd rather be inside blowing up zombies on their playstation 3, but I'd be willing to bet at least 10 kids bike to her school when it's nice.

Warren, I'm looking forward to followups. Have you looked into Walking School Bus and similar programs? Also, if you hook up with local advocacy groups and the school district you might be able to get some Safe Routes To School non-infrastructure funding if you create the right program to promote biking/walking to school.

I can't wait to hear the excuses your going to get. Too cold, too hot, too dangerous, too cloudy, yada yada yada.

Then at 3 oclock they get a ride home get out their bikes and skateboards and ride back to the school to hang out.