We were pounded last night! At 5 p.m. it was sunny and 70° F (21° C). At 6 p.m. half the sky was covered in ominous clouds with occiasional horizontal lightning. At 6:30 p.m. heavy rain and marble sized hail started up and the temperature dropped 15 degrees. Heavy thunderstorms continued until about 1 a.m. Light snow in the forecast this morning so with all the storm debris and chance of snow, I drove the kids to school and myself to work. I’m glad I did, there were several portions of the bike path that were still covered in standing water and I’m sure the parts that are close to the creek are covered in tree limbs and mud. Here is a shot of some of the hail that still remains this morning. 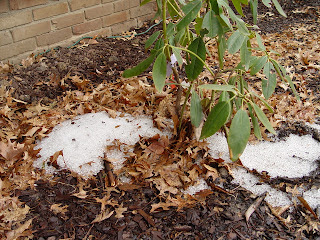 In a continuation of yesterday's post, I spoke with one of the crossing guards and with the school principal yesterday regarding the number of children who walk to school. The guard (who is stationed about a half mile away from school) says he gets about 8 to 10 kids a day. The principal said that there are a few more that walk the other direction, but not many more. She thinks that on nice days they'll get 20 -25. She then told me that we are fortunate to have the ones that we do as the city requires 15 children to warrant a crossing guard. She had to push hard to get the guy .5 miles away - but that is a very busy intersection and the city, rightfully, agreed to the guard. Fortunately, once a guard is in place it is very difficult for the city to pull them off that site.

So, most parents aren't letting their kids walk because of perceived safety issues. Additional crossing guards would, most likely, increase the number of people walking -- but, we can't get more guards until we get more people walking... Arrrrgh.

Thankfully, there are organizations like Safe Routes to School. I'm going to be contacting them to discuss our area. [I can't believe I'm turning into an activist.]

Now, for some good news -- I think my waiting by the bike rack for my son every afternoon is starting to pay off. Yesterday I heard a little girl ask her mom if they could ride their bikes to school. The mom said "Honey, I'd have to get Daddy's bike down to do that." So, I think I'll keep showing up to ride home with my boy. I do think I'm going to ditch the bright yellow jacket with the reflective tape and just wear a sweat shirt or tee shirt, just to make sure the "I don't want to have to buy all that stuff" excuse can't be used.
Posted by Warren T at 6:51 AM

Midwest weather is sooo much fun!

I'm sure you've found this already, but Kansas SR2S info is here. If you can find like-minded parents and even get some of the school administration and city officials, you'll have the best chance of getting some funding and action. Perhaps the school can distribute flyers for an informational meeting? You'll need to get all this done before the school year ends because applications are due Aug 25.

And if you can get in-kind donations from anyone, that usually helps with grant applications. Helmets are always easy to get for free, so please don't spend much money on them. Grant reviewers like to see that you've done plenty of foot work up -- gives them a little confidence that the money will be well spent.

I think the most difficult step is the most important: finding other people with similar concerns about children and exercise.

Do you have something in mind for SR2S? Things like a Walking School Bus and bicycle/walking promotion program at school can work well.

Ugh. We need a network of consultants who've done this kind of thing before to guide you through these things.

Talk to Aaron Bartlett, the bike/ped coordinator at MARC. He can help you get started. There is a round of SR2S funding coming up in Kansas.

MARC did some SR2S training at several Missouri schools last year, and I think they'll be doing some in Kansas soon.

You activist you. That catch 22 with the crossing guards is ironic.

I keep going back to when the kids are away from school. Many of those perceived safety issues seem to melt away during the summer and vacation weeks.

Anyhow, best of luck organizing that. I'm going to try to get some of the eight hundred people in my office to ride their bikes on "Ride to Work Day", or some other day(s) during May. I am realistically hoping for five.