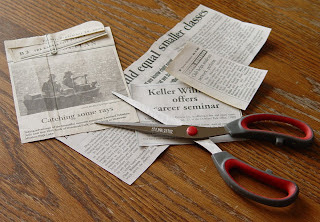 The other day I was sending Peter an e-mail with a cool link when I realized that I'm doing the same thing for my oldest sons that my mother did for me: I'm sending them clippings. When I was at K-State I could always count on at least one letter a week from my mom. Inside the letter would be some article she had clipped from the newspaper which she thought I needed to see. In retrospect, the articles she sent were timely and pertinent. I don't think I took them as seriously as I probably should have, but, truth be told, I still have some of them in the green folder in my briefcase. So, I'm sure Peter didn't really need to see the article on the Cornell Method of note taking (he's doing great on his own) but I've got a family tradition to carry on. 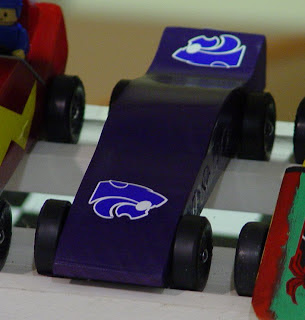 Saturday was Curtis' last Pinewood Derby race. I thought I was going to wax a little nostalgic (like I did on the last day of Webelos Camp back in August) but, to be honest, I was glad when it was over. Not counting the Pinewood Derby cars I worked on when I was a Cub, this was my 18th and last Pinewood Derby car for my boys. Eighteen cars cut out, sanded, drilled and weighted, patched, re-sanded, painted, axles lubricated and turned in hoping not to have gone over the magical 5.0 ounces. As I type, I see the scar on my left index finger from Trevor's second car, circa 1994. I wear the scars with honor, but I'm ready to move on. I think that if it were left up to the boys to run the race, it would be fun. When you get adults involved it can sometimes become petty and ugly. Cub Scouting with my boys I will miss; Pinewood Derby races I will not miss.

Jonathan was excited with the new Legends of Zelda game he bought which included all of the legacy versions of the game - "even the one you played as a kid" he told me. He was convinced I had an NES when I was his age, fourteen. I told him I didn't, and furthermore there really wasn't a home video game console available until I was around 16. Boggled his mind. He can't imagine a world without video games and really wanted to argue that, by golly, this is a game I had. So, we harnessed the power of the internet and researched it. PONG came out Christmas of 1975. I got a PONG clone in late 1976 when I was ~17. NES came out in 1985, the same year his oldest brother was born -- so, no, I did not have an NES when I was a boy.
Posted by Warren T at 1:58 PM

I showed my kids a WWW clone of PONG a few weeks back. I explained that it was state of the art graphics and sound at the time. They were amazed and appalled at the same time.

I made my son follow the rules of the pinwood derby. He was to make the car with minimal help. (like operating power tools).

I had never seen one of these, and when we got to the hall, I was shocked at the quality of the cars.

Nine year old kids made these?

Todd's car slid half way down the ramp and stopped. We looked at each other, smiled and shrugged our shoulders.

"Do you want to be a scout" I asked?
"I thought you wanted me to do this" he said.

The funniest part for me this last time was when they handed out the award for "Most Likely Made By A Scout." The look on the dad's face was priceless.