I'm not sure how any of this is going to fit into the article that I'm piecing together for Commute By Bike, but it sort of goes along with last Thursday's post about Close Encounters.

My youngest son is currently working on a citizenship merit badge. Part of what he is working on is learning what roles our elected officials play. Thus, I thought it might be a good exercise to observe the roles played by two of our nations Governors (one past and one present) along with a former Gubernatorial candidate who is presently a candidate for the U.S. Senate ... so we sat down to watch Predator.

As I rode to work through the woods, I was reminded of some of the scenes where the pointman was carefully making his way through the jungle. As he moved along he would have to keep his eyes open for the enemy, trip wires, natural obstacles and any other surprises that might pop up. It struck me that riding on the MUP through the woods in Leawood and Overland Park is a lot like being on point. Like I said last week, you gotta keep your eyes open.

With that in mind, I had the safest ride to work in recent memory. Sure, there were plenty of pedestrians and cyclists out; but, by harnessing a pointman mentality I avoided several situations that could have led to more close encounters.

For the most part, it is just common sense. If the path is wet and you're riding downhill towards a sharp turn obscured by trees -- slow down. When approaching a series of hairpin turns -- slow down. When a big group of joggers is headed your way, make sure you can get around them.

Some times you can see a good 30 seconds worth of the path. 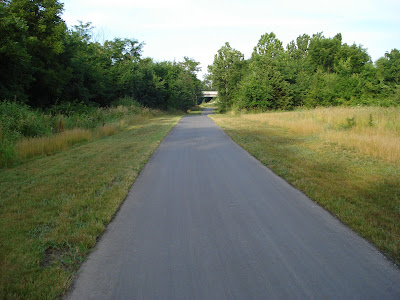 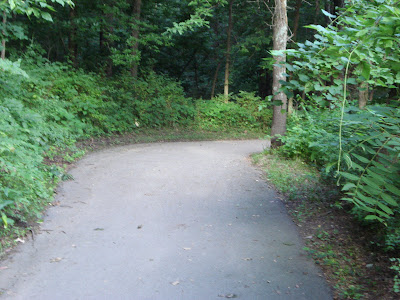 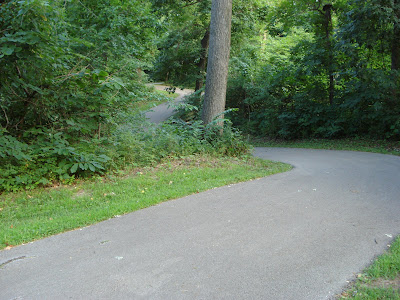 Can you see the jogger in the picture above? Neither can I, but she's there. Black pants, black shirt, long dark hair, she looked like a young Maria Shriver. Had I been hammering through this series of twists and turns I probably would have been apologizing instead of saying "Good morning."

I've ridden the route enough times that I have a good handle on places where it looks like it would be a blast to go as fast as possible, but the path is actually treacherous. Today, I was on point. Stay frosty. Oh, and "Get to the chopper!"
Posted by Warren T at 7:33 AM