I needed a change of scenery this morning. Not much, just a little time off the beaten path. The construction on the Metcalf corridor continues and part of the Vision Metcalf project between 103rd and 99th is the addition of a bike/hike path that actually runs south from the Metcalf South Shopping Center parking lot (call it 97th Terrace) south to 103rd, connecting to the Indian Creek Bike/Hike Trail. Here is a shot from this morning heading south between 99th and 101st. 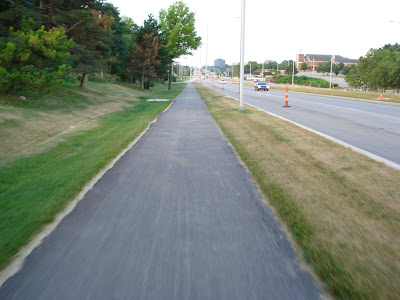 Once they finish the part just before the bridge, that will become a regular part of my route. As it is now, you can ride it but you're separated from the north bound Metcalf traffic by traffic cones and, perhaps, three feet. Probably 15 to 20 seconds that are not for the feint of heart.

Looks like there are some nice (proposed) changes to allow more bike traffic. Check page 7 of 11 HERE.

"In order to become a sustainable urban neighborhood, Overland Park must put an even greater reliance on people cycling as a true alternative mode of transportation."

Curtis and I attended the Overland Park City Council meeting last night with our boy scout troop. There were actually two bike trail related issues that were brought up:

1) Contract for needed repairs to the bike/hike trail goes to the lowest bidder -- approved.
2) Much discussion and approval of plans for additional construction at the Douglas L. Smith Middle Basin Treatment Facility (10001 College Blvd.), that is close to the bike trail by Indian Valley Park (116th & Knox).

During the discussion about the waste water treatment plant, they went back over plans to build a large, inflatable dome to collect the gas from the digester tanks and use it to produce electricity to help power the plant. I choose to refer to this dome as the giant gas bag. Anyway, in order to obscure the view of the giant gas bag from the bike trail and the houses close by, they are going to have to plant additional native streamway plants ... and they already have a guy who specializes in that. Imagine, some one has a job that appears to amount to the ability to cultivate weeds.
Posted by Warren T at 12:01 PM