Why not? Writers and filmmakers do trilogies, why not me? I present to you Stop III. Same intersection as the other two...

Unfortunately, it is true. This morning I set out on my last official commute by bicycle. Tomorrow we have to have everything out of the office and moved home. It's been a few years since I've worked for home and I used to like it. What I haven't been able to get used to is the idea that I'll no longer be a bike commuter. I'll ride on errands and for fun in the morning before work -- but that won't really count as a commute.

Anyway, in the spirit of last day of elementary school pictures, here are a couple shots of a cloudy ride in this morning. 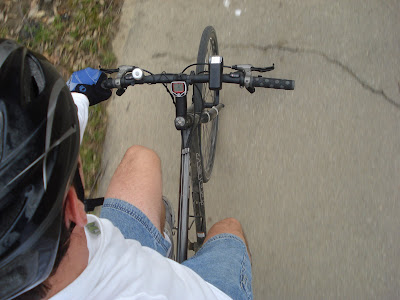 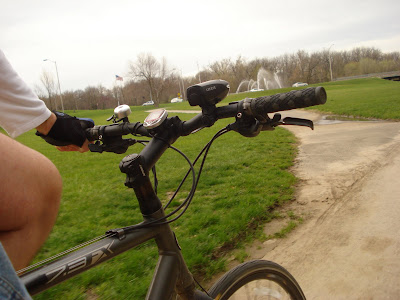 I'm toying with the idea of doing something a little different here that will still be bike related. Give me a week or two to get that organized...
Posted by Warren T at 6:51 AM

You absolutely can still commute to work. You just have a lot more choices. When I had a free-lance writing gig, which I was afraid would suffer from my tendency to procrastinate, I got up in the morning and drank my tea and got dressed - in cycling clothes - and rode to work. 9 miles or 13; occasionally 17. When the day was over, I took an evening ride (sometimes with the bike club).
It broke up the day - and did absolutely amazing things to my endurance.

I'll ride on errands and for fun in the morning before work -- but that won't really count as a commute.

I had a free-lance writing gig.

I think if u could there then u also could not listen the stop sign.