It was a beautiful morning and I decided to take the long way again. About 12 miles into the ride I became very philosophical as I realized I was looking around at my surroundings more and looking at the bike computer less. I mused to myself that the nice thing about riding this route for my commute a second time allowed me to focus less on figuring out where I was going and more on the things around me that I'd missed before -- like that tennis court and swimming pool. It was so weird that I didn't remember those from Monday. And then the path ended abruptly.

Yep, sometimes I am an idiot. I took a wrong turn and added an extra 0.7 miles to this morning's ride. Doofus. After getting back on track, and in keeping with last night's post, I shifted down to make it up this hill. 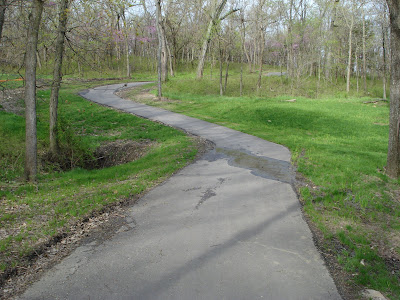 The camera is being held level and although it may not look like much, this hill is a challenge.

For those of you who occasionally use the Indian Creek Trail ... the detour I previewed a couple weeks ago will be opening in a few weeks. I got the following from the engineering firm that is working on the project:

"The bike/hike trail is scheduled to open once work is completed north of the noise walls in the area and the major work on the bridges over the trail, possibly within then next two weeks, depending on the weather; unfortunately more rain is in the forecast, which could slow progress. As of this morning, the contractor is placing sod along the trail and painting the noise walls."

Warren - where is the location of the picture? I can't seem to place it for some reason and I've been on all the local trails..

South side of St. Andrews Golf Club between Switzer and Neiman around 140th (ish). If you are headed west on the trail it will take you past the south side of the Deanna Rose Farmstead. After some very fun, short, hair pin turns -- pretty soon after that you'll have this hill that ends right next to some of the golf club's greens. Going down the other side is a nice break. I did a veloroute for a shortened version of this that starts at the trailhead around 103rd and Metcalf ... it's a nice ride.

The hill in question is between markers 7 & 10.