Good to be back

Let's just say the last several months have been real busy. Being on call 2 weeks on and 1 week off might be part of it. The last time I'd been on a ride of more than an hour was the end of November and the one before that was in early October. Looking at the numbers validates the general malaise that I've been under this winter while working from my basement. Today was a chance to change all that.

Last night we had another Eagle Board of Review for one of our scouts. Afterward the group was asked if anyone would have a chance to run the paperwork by the Scout Office in KC, MO. It just so happened that I'd be taking the day off since this was the first time I could take the comp day earned for being on call on President's Day. I knew I'd be taking a ride today, just hadn't made any concrete plans. I told them I'd be happy to run the papers to the office. This would give me a chance to check out the addition to the Indian Creek Trail that opened in December. This winter's weather crushed all my planned attempts to ride out there with Peter.

Sunny and 41 degrees as I headed out the door. Really sunny. I got to the underpass at Wornall and went from extreme bright to what appeared to be pitch black. It was a good thing I slowed down a bit as my front tire became mired in this... 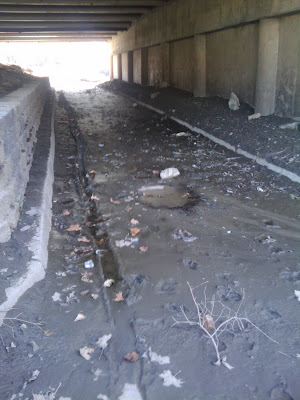 I walked up to Wornall, rode across and continued on. The new stretch of trail begins at 99th and Holmes and is reported to end at Banister and Lydia. I figured I could ride on Lydia and work my way around to the Scout Shop and avoid the nasty traffic on Holmes. Turns out that the trail ends rather abruptly and although it is in the vicinity of Banister and Lydia, the closest tie-in to a road or parking lot is a mile or so back. 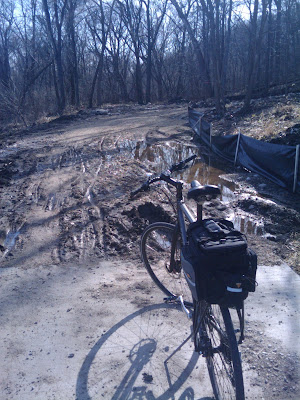 I back tracked a bit and decided that even though the ground here was pretty muddy, it would cut some time off my ride if I climbed the hill up to Lydia. Yeah, it was a soggy mess and further than it looks in this picture... 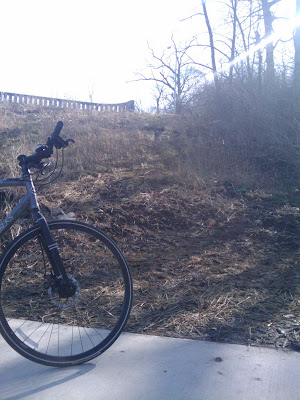 I made it to the Scout Shop and locked Bucephalus up to the closest thing to a bike rack that they have (see below) and turned in the paperwork. 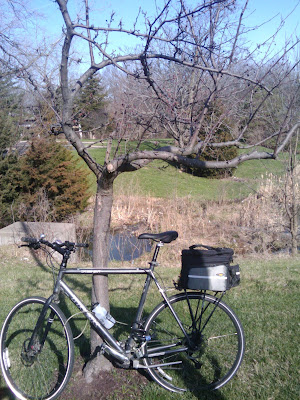 When I got home I checked the bike computer: 18 miles in 80 minutes. I feel great. I realize now that rides under an hour are great and all ... but it's the rides over an hour that really clear the head and make me feel, well, wonderful. I don't know how many times I'll get to ride that far in the next couple of months before school ends; but I'll do my best to get some more rides like this one in.
Posted by Warren T at 11:40 AM

Sure hope they clean that mess up for you. What a cluster :)

What? The scout shop didn't have a bike rack? What's up with that? How are scouts going to earn their cycling merit badge, their fitness badge, or their transportation badge (assuming there are such things)?

I KNOW. I've got a message into the exec. suggesting it might be worth looking into. The biggest issue is the location, not really bike friendly where it's at.