Temperature at departure = 70° F (21° C)
Dave A's wife saw an interesting head stone in Idaho.  If I were Leah, I'd make sure I was off on vacation this December... (look close). 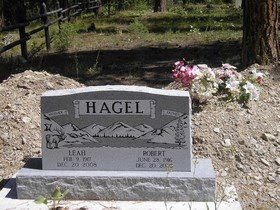 Tip of the helmet to Treadly and Me for the discussion of parents coddling children.  I love the comment "'curling parents' (sweeping obstacles aside for their kids)."
In the post, TnM links to an article from the Daily Telegraph that says:

"The simple joys of childhood such as bike riding, climbing trees and even just crossing the road are basic skills that are in danger of being entirely lost."

This is rather personal since I had a conversation yesterday about my letting my son ride his bike to drum lessons wherein he had to cross a four lane road.  Even after I explained that there is this thing called a crosswalk that he used, an acquaintance was shocked that I'd let a 12.5 year old venture out like that.  By the way, he was fine.
For the record, if I'm not with them, my younger kids stay off the really busy roads.  Much to my chagrin, they will ride sidewalks sometimes.  If they have to cross a busy road, they walk the bikes across in a crosswalk.  I've ridden with them quite a bit and discuss situations we encounter and best practices for riding on streets.
In my opinion, my kids have a huge jump on other kids when they finally get their learner's permit and start driving.  They know most of the rules of the road.  They know the streets around their neighborhood.  They have an idea of how unpredictable some drivers can be.  No, they're not perfect, there are always some white knuckle moments with any new driver ... but riding bikes puts them ahead of the curve.
Sorry, I really didn't mean to rant like this.
Finally, it has been a while since I baiku'd for Fritz.
Clouds hover above
No one on the path but me
The rain is my friend
Posted by Warren T at 6:47 AM

WT - Right (er ... Ride) on! While I don't have kids, I know that cycling has made me so much more aware when I'm driving the cage. Can't help but believe that this will have the same impact on the sprouts.

As for riding on sidewalks...

Section 8-1590d of the Kansas Statutes for Bicycles says... "Wherever a usable path for bicycles has been provided adjacent to a roadway, bicycle riders
shall use such path and shall not use the roadway."

I think a sidewalk qualifies. Chagrin :)

As for the jump on driving tests...based on the drivers I see on my commute...only require a pulse for a permit/license.

Warren: Thanks for sharing your experience teaching your kids about bicycling. A while back I posted an interview with parent and Bikescape podcaster Jon Winston, who offered a lot of tips for bicycling parents. He basically agrees with you, that kids who bicycle (instead of being driven everywhere) have a jump on their peers. Tailwinds, Paul