Oh What Fun it is to Ride

We got more snow last night but since I had psyched myself up to ride the XYZ in the snow yesterday, I hopped on the beach cruiser this morning and headed off to work. This morning's ride rates as one of my top five rides of 2007! I can't believe how much fun I've missed by not riding in the snow more. Granted, it helps to have an inexpensive bike to plod along in and this one fit the bill -- big time. 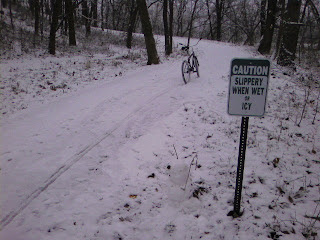 There wasn't much traffic to begin with, but the traffic that was out gave me plenty of room. Once I hit the trail I was surprised how well this bike handled the snow and ice. I didn't slip once, and at times I was riding on sheets of clear ice of re-frozen run-off from the day before. The snow was a little over 3" high for the majority of the bike path and even though I only rode about 3.5 miles, I felt like I'd ridden 12 miles or more.

was playing in the head phones and Linus and Lucy and Christmas Time Is Here [Instrumental] couldn't have come on at a better time. A peacful, slow ride through new snow with a great soundtrack for the morning. Perfect! 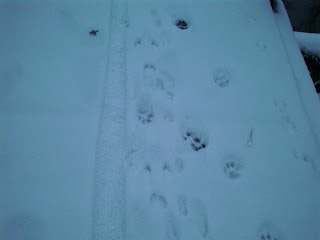 The tracks on my favorite little bridge include bobcat, rabbit, squirrel and myself. Grrrrrr baby. Very Grrrrrr!
Posted by Warren T at 6:48 AM

That's the spirit! See why I have trouble staying in when it's snowing?!

When you get a chance over the course of your review of the XYZ Cruiser, could you please post an up-close picture of the tread on the OEM tires?

Yay for snow! I laughed as a fellow shoveling his driveway at 06:30 this morning said as I passed by "You're a hardcore biker!" No, my good man, I'm having a blast... You, on the other hand, are out shoveling snow before the sun comes up. You're hardcore!