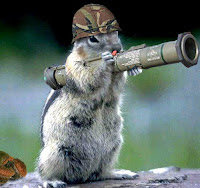 First, I would like to commend the troops of the fighting forth for their efforts. In fact, I observed three of you this morning as you executed daring feints against the enemy in rapid succession. Your bravery has been duly noted.

In light of the exceptional attempts against the enemy this morning, it pains me to say that our current tactics have been unsuccessful. The enemy continues to make daily sorties onto our path in both morning and afternoon. This must stop. Several of you may be asked to go on missions of a more dangerous nature in the near future; just remember I am proud to have served with you.

Have you ever seen this photo?

Wow, simply wow. I hope this isn't what they have planned for me.

Yeah, and I think the squirrels have held a war council with rabbits recently.

Rabbits are evil too. Somebody I work with hit a rabbit a few weeks ago on a fast road ride and went down. The plastic visor from his helmet snapped off and lacerated his nose -- cut it the end of his nose clean off. They had to sew it back on.

Squirrels are our friends. My wife even has a squirrel feeder in the back yard.

I believe they call that a "Sleeper Cell."